Urban greening is something that cannot be ignored. A world with lots of greenery is now replaced by a world that is mostly covered with concrete which affects the ecosystem. Since the consequences of climate are very much visible, it is important to go back to a greener world. The world is getting damaged by the changing climate and it is also affecting humans, animals and plants. Every day, the world is learning about climate change. This had led to incorporating greenery increasingly in urban planning.

The importance of urban greening

Architects and urban planners have been exploring ways to implement urban greening when designing new buildings and new areas, both for business and residential purposes. When building, the future is also taken into account as well as the immediate use of a building. By incorporating greenery, these buildings contribute to the environment where these buildings are located and to the people who are using these buildings. Urban greening contributes to producing oxygen while it also absorbs carbon dioxide, contributing to the climate outdoor, but also indoor. Not only does greenery in urban areas contribute to people, but it also contributes to animals, insects, etc., thus contributing to biodiversity. Living walls and green roofs provide a living habitat and food to birds, bees and butterflies. In addition, urban greening helps with combatting the urban heat island effect, which is the effect of the temperature in urban areas being higher than in its surrounding areas. This is caused by reduced natural landscapes in urban areas. By implementing green in urban areas, this effect can also be reduced.

Get started with the products from Mobilane

With living walls, greenery is easily added to buildings. The LivePanel Outdoor living wall system from Mobilane is an innovative system for use in a multitude of vertical greenery scenarios. A bare and grey exterior is transformed into a natural flourishing living wall with LivePanel Outdoor. The living wall system can be installed on both new and existing walls. LivePanel Outdoor contributes to biodiversity, clean air quality levels, heat regulation and climate-proofing of city buildings. The modular system consists of gutter profiles and exchangeable plant cassettes. The plant cassettes with real plants are placed in the gutter profiles that also serve as a water reservoir. With LivePanel Outdoor, not only a green facade is created, but it also makes a building an eye-catcher. 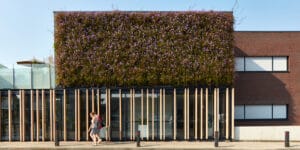 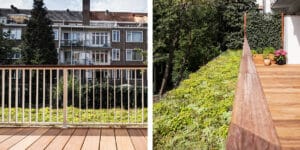 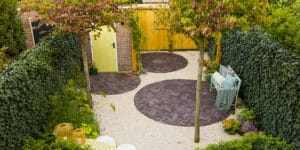 Interested in greening the urban area with Mobilane? Contact us for the possibilities or have a look at our where to buy page.