Green wall in one of the world’s most sustainable offices

An indoor green wall measuring over 40 square meters has been installed at the sustainable head office of dryer and cooler manufacturer Geelen Counterflow in Haelen by official Mobilane dealer Herman Vaessen.

Daan Smolders, Project Manager Herman Vaessen: ‘We have now installed several green walls and we have skilled horticulturalists who are capable of doing this. Once you know how the LivePanel Indoor system works, it is easy to do. As a company, we promote the use of indoor green and green walls enormously’. 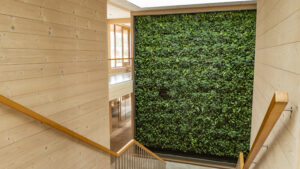 Most sustainable office in the world in 2016

The Geelen Counterflow office in Limburg is one of the most sustainable in the world and was even named the ‘most sustainable office in the world’ in 2016, with a score of 99.94% according to the international BREEAM certification system. The vertical green wall that was recently installed also effectively contributes to the sustainable look of the building and the well-being of its occupants.

BREEAM assesses buildings in over 77 countries on their ‘sustainability’ based on nine categories. These include energy, land use, ecology and health. In contrast to other sustainable rating systems, BREEAM is an independent certificate. The system is managed in the Netherlands by the Dutch Green Building Council (DGBC).

Annemarie van Doorn of the DGBC: “Besides delivering an exceptional sustainable presentation, Geelen also shows to be a good employer. Geelen creates optimal conditions and a pleasant workplace for employees with this building. This health perspective often remains underexposed, but can have an enormous impact.”

Green image in and around the office

When designing the office, attention was also paid to working conditions. Throughout the building, daylight, views, greenery, lighting, and ventilation have been optimized to guarantee the health and productivity of the employees. The green wall has an air-purifying effect but also a positive effect on the productivity and creativity of the employees. In addition to the large green wall of plants inside, a nature garden has been laid out around the building with dozens of species of vegetation and with facilities for birds, insects, bats, and amphibians. 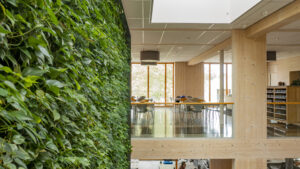 The entire building has been constructed using materials that, where possible, are ‘Cradle to Cradle’ certified. These are materials that consist of raw materials which have not damaged the environment and which can be reused at the end of their life. For example, the entire structure is made of solid wood and the building generates more than 50 percent extra energy than it consumes on an annual basis.

Curious about the benefits of green walls and the effects on the health of visitors and employees? Read more here: The 5 most important benefits of plants on health.

Air-purifying green walls in the office of Blom Ecology