GREENERY IN THE PUBLIC SPACE: A CLIMATE-PROOF CITY

Public space and green. Nature plays an important role in creating enjoyable outdoor meeting spots. Muncipalities increasingly focus on green adaptation, the care of nature and stimulation of citizen’s initiatives by providing subsidies and grants. In the Netherlands, there are initiatives such as “Tiles out, Plants in” or the 316 bus shelters in Utrecht that are covered with green roofs. Adding greenery plays an important role in assessing the quality of the public space. Research by Wageningen University shows that greenery ensures an attractive business climate and has an influence on people from high class and middle class settling down in the city. Green in urban areas strengthens the ecological quality of the city and has a favorable effect on the liveability, public health  and the attractiveness of the city. There is however no abundant space to use greenery in the public room. Applying green roofs and green facades on a large scale is a good solution for sustainable and climate-adaptative urban development.

Looking for possibilites to create a climate-proof city?

Green in urban areas is scarce

In urban areas, green is a scarce object. Green in cities has disappeared due to the construction of new housing, buildings, roads and courtyards and the construction of industrial areas. Increasingly more muncipalities realize that greenery has a great influence on sustainability and climate-adaptive urban developments. They encourage citizens to implement green for example on roofs, facades, gardens or balconies by providing grants. A few reasons why one should invest in green cities.

Reducing of floodings and peakload on the sewer

A few scenarios have been developed with the climate change in mind. In all scenarios, the frequency of peak rainfalls and rainfall intensity has been increasing. Insurance companies expect an increase of 140% of damage caused by floodings. Increasing the amount of greenery in cities improves the watermanagement and reduces the problems caused by rainfall peaks. Green roofs especially on large buildings such as factories, hospitals, and large offices helps with reducing the rainfall peaks because green roofs retain rainwater and it will slow down the abundant rainfall. A part of the rainwater is retained by the bottom of the green roof and does not run off. This will lead to less load on the sewer and helps with maintaining the good quality of the surface water and keeping the houses dry.

Green improves the environment and adds color to the building. The attractiveness of the area increases and therefore creates a better living environment and business climate for citizens as well as companies. In addition, a green city ensures an attractive living environment which makes it easier for (international) companies to retain employees. An attractive living and work environment is for big international companies one of the deciding factors when opening a new branch in a new location. Return on investment in green is partly realised by the higher value of the real estate. Public investments for example in public greenery by muncipalities is earned back by higher tax incomes. Research has shown that the presence of green in the near environment increases the value of houses and real estates with 4-15%, depending on the local circumstances

Biodiversity means the different forms of life. Different species and types of green in urban areas increase biodiversity. When you have a wide range of greenery, it will attract more life forms. Many insect pollinators and a diverse range of greenery contribute to creating a food source for birds and other animals  Therefore, pollinators and pollination are important in the ecosystems and are essential for biodiversity. Green roofs and facades are additional green elements in the city. These green elements play an important role as a green connector between city districts.

Vegetation or greenery is of high importance when it comes to experiencing noise disturbance from traffic and industrial areas. In the first place, noises coming from green in the environment is mostly experienced to be pleasant whether it is caused directly (rustling leaves) or indirectly (birds). Greenery ensures that noise gets partially blocked and people experience less noise disturbance. The spreading of noise reduces by 3-10 decibels. Greenery does not have influence on the actual level of noise from noise sources and a few plants will usually not cause audible noise reduction. To use vegetation for noise reduction, very dense planting is required. This can be realised with green roofs and facades.

The Urban Heat Island (UHI) effect is the effect of temperature in urban cities being higher than the surrrounding areas, especially on hot days with peak temperatures. This happens in the Urban Canopy Layer, the bottom layer of air that reaches the roofs of the buildings and is strongly influenced by processes happening on microscale. The UHI effect is caused by the different materials responding to solar radiation. Buildings and streets absorb the majority of solar radiation and transform this into heat that people can feel. Plants bounce off a part of the sun rays and use the absorbed solar radiation for photosynthesis and damping of water. In addition, a green roof or facade does not consist of flat material because a 3D effect is created using different types of plants. The 3D surface better bounces off heat than a smooth, paved surface. This surface is better able to dissipate the heat upwards with the rising air. Due to these effects, the area above plants is much cooler than the area above a paved surface.

Especially on hot summer days, the UHI effect is a big problem because the health and workproductivity of the people is affected by the high temperatures. Research has shown that on summerdays in cities in the Netherlands, it is 2.3 °C warmer than in the countryside. This can lead to a temperature difference upto 5.3 °C. A solution is applying green roofs and facades in urban areas. For every 20% more green in the city, the temperature reduces with 1 °C.

‘‘Green roofs and facades stimulate biodiversity in the city. This is important for birds and insects such as butterflies and bees’’ - 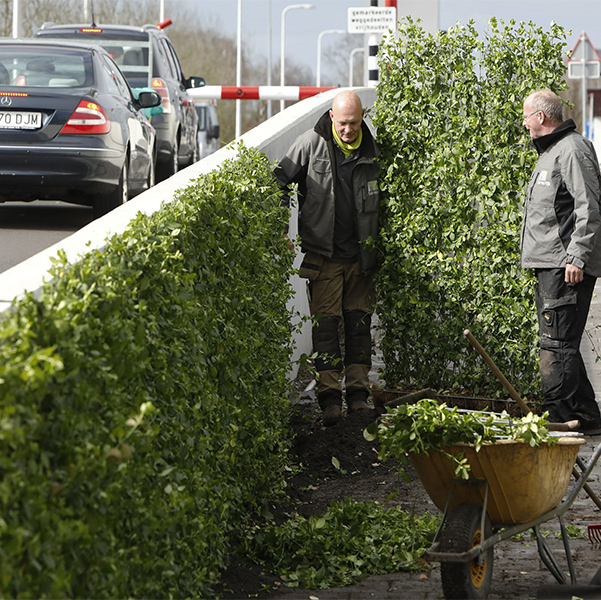 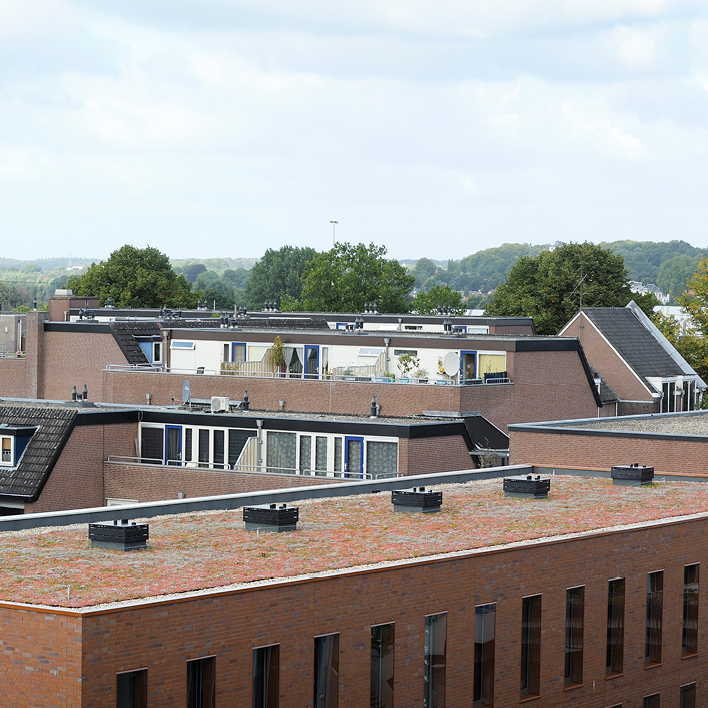 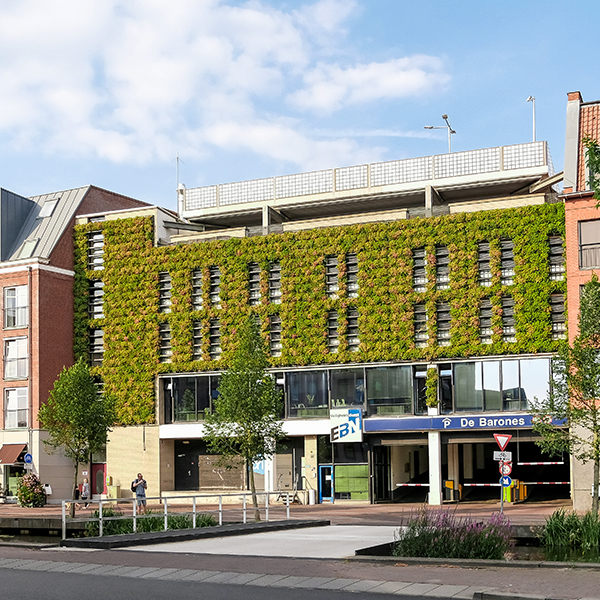 The benefits of Mobilane Green Screens

Particles less than or equal to 10 micrometers in diameter are so small that they can get into the lungs, potentially causing serious health problems. Ten micrometers is less than the width of a single human hair.  Coarse dust particles (PM10) are 2.5 to 10 micrometers in diameter. Research has shown that the Mobilane Green Screens captures 40-60% finedust and combats air pollution. Especially in the surroundings of cities and highways, air pollution is increasingly becoming a big problem with severe consequences for the health of the residents. By using the Mobilane Green Screen Hedera helix Woerner, a healthy environment for humans and animals can be created. 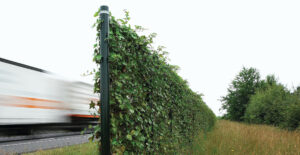 Plenty of noise-reducing walls alongside the highways and residential areas are often covered with graffiti which is mostly not appreciated by people. The Mobilane Green Screens can be used to prevent or cover graffiti. It creates a natural look and stimulate biodiversity. By installing Green Screens, costs for regularly removing the graffiti can be reduced. When the noise-reducing wall is covered with green for minimally 180 cm, it discourages graffiti artists to use this wall for their graffiti art. 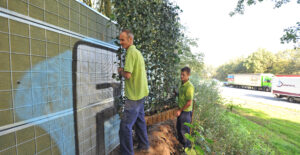 Increasingly more muncipalities implement the use of plants and green in the design of the public space and encourage residents to do the same by providing. Urbanisation is inevitable and a solution for this is to create an uninterrupted green network of nature in and around the city. The green roofs on shelters are covered with the MobiRoof green roof systems. This is a system consisting of 6-8 different types of sedumplants. This succulent plant is suitable for any weather conditions and needs low maintenance. The Mobilane MobiRoof has been installed on bus shelters in Utrecht, Gouda, Apeldoorn, Woerden (the Netherlands), Leipzig (Germany), Helsingborg and Malmö (Sweden). 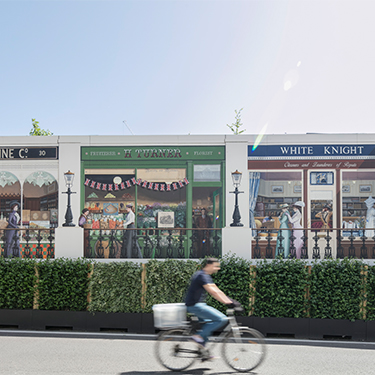 A green walk on the wild side in Woking

‘‘Residents, customers and visitors to Woking High Street will be enjoying a new natural walkway from this May with the installation of a 75m living wall. The Mobilane Green Screens have been placed along the length of the Woking Train Station’s exterior wall as part of the Council’s green commitments.’’

‘‘A bridge in Alphen aan de Rijn (The Netherlands) has been transformed from a bleak, grey concrete mass to a beautiful greened expanse, courtesy of its 100-metre new Mobilane Green Screen, planted with a dense foliage of Euonymus.’’ 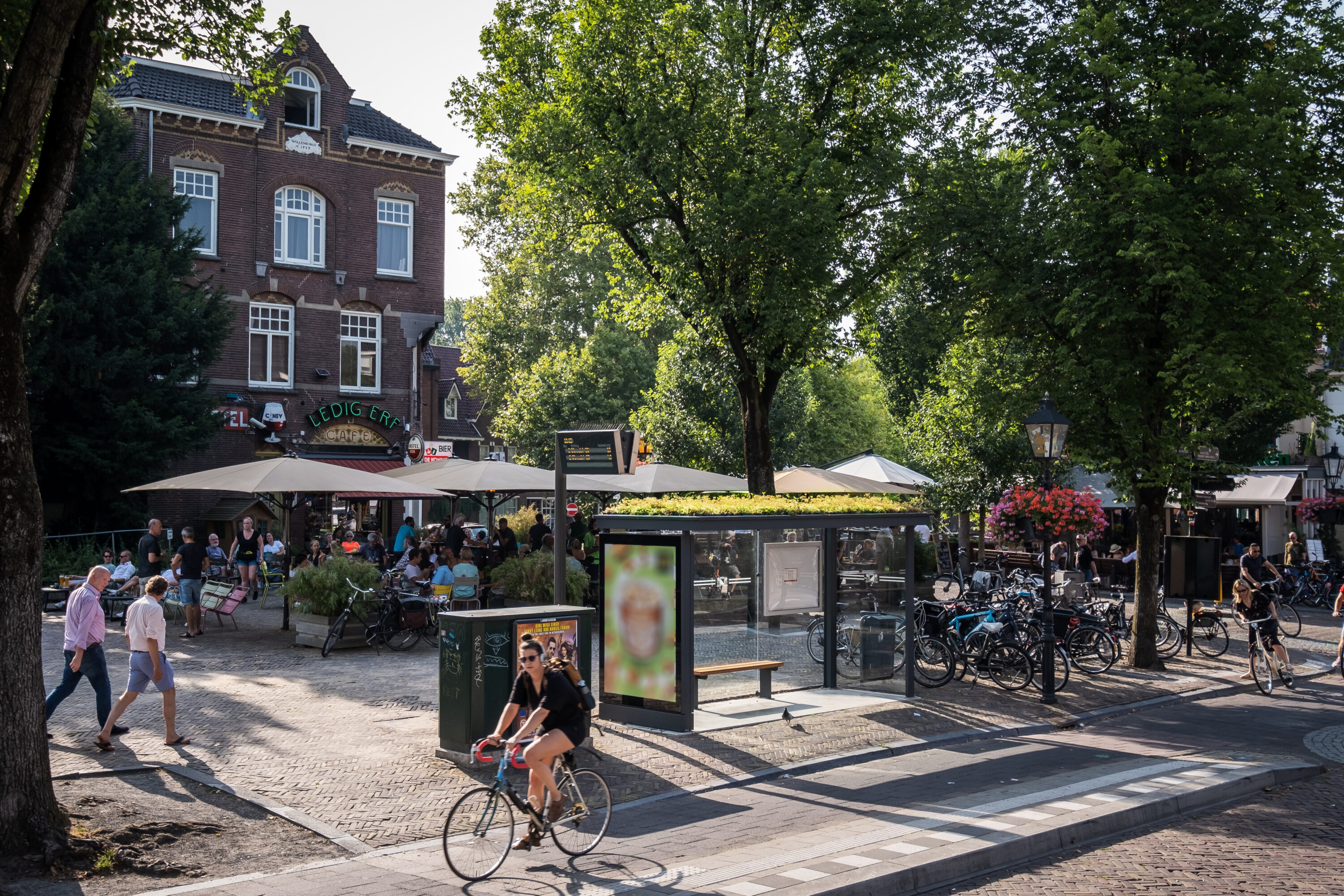 ‘‘The muncipality of Utrecht wants to make plants and green accessible to anyone and improve the quality. Green makes the city Utrecht liveable, beautiful and its good for the environment. The sustainable bus shelters in the public space encourage the ambition to become a green social city. ’’

‘‘This green wall installation on the parking facilities at Breda creates a fitting backdrop to the street and urban surroundings. This part of town now looks better and brings a refreshing view, particularly on warmer days. The planted wall also attracts interest from birds and bees. It helps soften its city surroundings and can have nothing but a positive effect on the climate’’