The Mayor of London’s £50 million pledge as part of the “New Green Deal” will not only support the creation of 170,000 new jobs but could embrace biodiversity measures including the installation of green roof bus shelters in London. Aiming to become a carbon-neutral city by 2030 target, London’s Mayor wants to tackle the climate emergency and the air pollution crisis in his 10-point plan.

London could do well to look to other European cities as exemplars here: Utrecht, Haarlem (Netherlands), Leipzig (Germany), Helsingborg and Malmö (Sweden) have adopted ground-breaking strategies to maximise natural elements in premium urban spaces with their “green bus stops”. Green bus shelters across London, bedecked in plants, absorbing rainwater, capturing dust and harmful pollutants (PM10s), regulating temperatures, could be important tools to face the challenges of achieving a biodiverse capital head on. 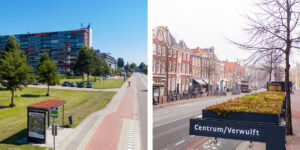 Although green roofs are becoming ever more prevalent in urban areas, there is an ongoing challenge to factor in additional greenery in high traffic, space-poor areas in every city. Green roof bus shelters meet the brief exactly: The recognised benefit of plants with the added features of reduction in noise and air pollution, rainwater harvesting, carbon sequestration – and they are visually impressive too. London take note: As the stand-out flagbearer for green roof bus shelters, the Dutch city of Utrecht has been enjoying over 300 green bus stops planted with a sedum roof since 2019. The once sparse streetscapes now boast a flourishing wildlife area atop each of the green roof bus shelters, inviting bees, butterflies and other insects into a previously hostile environment for them.

The sedum plants used in these green roof bus shelter examples are planted within a ready-made green roof system, MobiRoof, designed and supplied by Mobilane. Storing water in their leaves, the sedums are hardy against all the elements that London weather could throw at them, surviving well in the wettest of rainy seasons and thriving during periods of drought. The natural water buffer they create can retain more than 20 litres per square metre, harnessing the rainfall and preventing additional volume draining into overflowing sewers and exacerbating the potential flood risk. 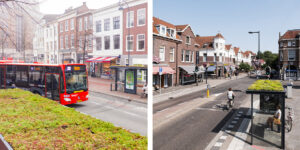 The sedum plants within the green roof bus shelters have their work cut out fighting against air pollution in London cityscapes. Documented research shows that their succulent foliage helps remove no less than 85% of the fine dust from the air. This is an impressive feat for the tiny plants, first line of defence and exposed to London thoroughfares where emissions of nitrogen oxide (NOx) emissions are already in excess of the European regulatory limits.

Requiring little maintenance, a green bus stop – or “bee stop” as they are increasingly badged – offers a hiding and breeding spot for insects. Planted with six to eight different varieties of sedum, the system’s cassettes easily click together, meaning the plants step boldly forward on their ecological journey from day one.

Khan’s plans for London are bold.  Public transport will become greener, he said, committing to billions of pounds of government investment in electrifying buses and developing solar and planted solutions to improve the living environment across the city. Bristol and Edinburgh are also leading the way with net-zero targets, so London’s town planners and authorities will need to step up.

The green bus stop is a simple concept, and one that has grabbed worldwide attention and interest, as well as a “buzz” of positivity. London? It’s time.